Stuffed peppers for tea this evening using two of the Aldi peppers.

The feta has been in the fridge and had a best before date of October 2013. But because it was sealed in the packet, it is fine. Now I have opened it, I will have to use it up quite quickly.

Aldi potatoes aren’t showing as very cheap on mySupermarket. Cheapest are 75p/kg, they may be cheaper actually in the shop. Get them as cheap as you can, or maybe use a tin if you like them. Personally I don’t.

Cook the rice as per the packet instructions. Chop the onion and stir it into the rice. Chop up the feta and stir that in too.

Cut round the stalk of the pepper and scoop out the seeds. Stuff as much of the mix inside as you can and put the stuffed peppers in a small baking dish. Surround the peppers with the remaining rice mix. Drizzle over a little oil.

You can, of course, use value rice here. I used a packet because I have a few in the cupboard and I am trying to use up supplies I already have. And it did give a nice extra bit of flavour.

Chop the potatoes into even dice, peel them or not, as you like. Put them in a covered dish and microwave on full power for 5 minutes. Or simmer on the hob until soft. Drain and toss with a little oil, salt and pepper. Put on a baking tray. 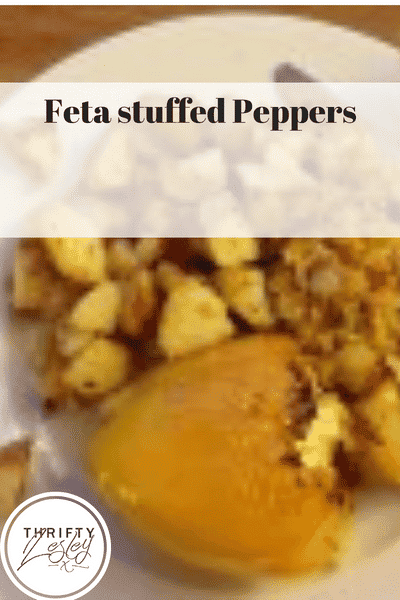