Apples again – baked sponge with an apple base, and compote with raisin pancakes 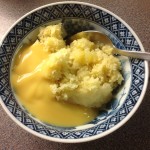 I did a sponge pudding for DP yesterday. He went for seconds, so it worked well, even tho I cooked it in the microwave and it looked a bit pasty.

I sliced up some apples and put them in my trusty pyrex dish. They ( I have three, all bought from charity shops) are some of the most used pieces of equipment in my kitchen. I seem to use at least one of them, most days. As I was intending to cook the sponge in the microwave, and it only takes 6 minutes, I thought there was a risk of the apples not being cooked enough, so I gave them a blast for a couple of minutes first to soften them. No sugar, these were the dessert Fiesta apples, so quite sweet enough already. 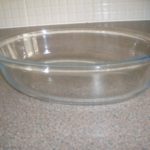 Then I mixed 80g sugar and 80g vegetable oil in a bowl, with a wooden spoon, and beat in 1 egg. I just put the whole egg in at once, it doesn’t seem to curdle when using oil and gave it a good beat until it all came together. It wouldn’t matter if it did curdle by the way, just bung the flour in anyway, it will be fine.

Then I stirred in 80g self raising flour and when well mixed, spread it on top of the cooled apples. Then it was into the microwave on High for 6 minutes. The whole thing only took 10 minutes max, from start to finish. Bit dangerous really, don’t know that I want to be 10 minutes away from a baked sponge at any point 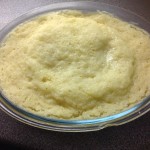 When cooking sponges in this way, the top of the sponge will feel a little sticky, and may seem to be not cooked enough, but don’t be tempted to give it another minute or two, or the sponge will be dry and maybe a bit tough as well. As you can see, it looks pasty and not particularly appetising when cooked in a microwave instead of the oven. But 6 minutes in a microwave costs almost nothing in fuel, and the sponge only gets covered in custard or ice cream, so it doesn’t notice once it is served.

This size makes 4 portions, depending on your greed (it only lasts 1 day in our house as DP has 2 large portions usually). One can of value custard will also serve 4.

We have lots of pots of cooked plums and raw apple in the freezer, so they will be getting the same treatment. Or oaty crumble of course, DP LOVES his oaty crumbles. I didn’t freeze any rhubarb this year, by the time we had given away a load and used lots, the plants wouldn’t really stand any more picking. Many people over pick rhubarb, and then the next year, the stalks are spindly. Stop picking in August, give it a chance to build up its strength, give it lots and lots of feed (especially over the winter) and water, and you should be fine.

Plus I have lots of pots of bargain jam from Approved Foods – 12 pots of M&S apricot for 50p each (although my daughter has bagsied 4 of those!) 2 x CoOp black cherry for £1 each, a carrot jam for 99p ( I was curious as to what this would taste like, I haven’t tried it yet – I’ll let you know!) 2 x Ginger jams for £1 each, 2 x Blackberry and 2 x Gooseberry for 60p each.

You can put any fruit, or fruit mix, or jam, as the base of this sponge, and flavour the sponge or the fruit in much the same way as for the oaty crumble. So lots and lots of different variations

By the way, I got 8 cans of mandarin segments for £1 last time, so 12.5p each. I will probably add some to an apple crumble at some point. Anyone got any other good ideas to use them? 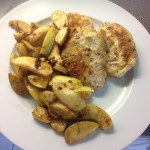 And for breakfast this morning, I revisited an old favourite. I sliced up some apples and fried them in a little butter and sprinkled them with mixed spice, had to deglaze the pan of the delicious sticky bits with a little water to make a sticky sauce, couldn’t waste that! Then had them with Raisin Pancakes. Cor, they were good

, kept me going all morning

Right, off to do dinner. More tomorrow, see you then 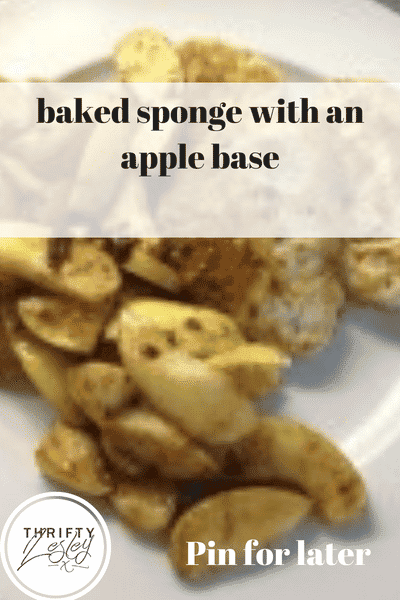