Balti spring green pancakes for dinner, and one left over for breakfast 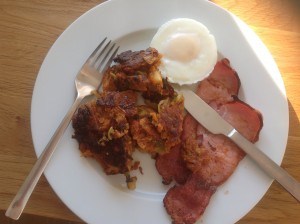 Don't know about Thrifty, I'm more like Filthy Lesley today
20 handy hints using everyday items, do you know these ones?

Had a scrummy dinner this evening. One of those made up things, but similar to the Spring Green Breakfast Pancakes.

This time, I chopped up the inner, paler, leaves of a head of spring greens. Sliced up a couple of onions and sauted them until soft, added the greens and two rounded tsps of Pataks Balti curry paste and fried it off for a couple of minutes. Then added half a tin of chopped tomatoes and left to cool.

Once cool enough, I added enough flour to make a thick paste. Then I heated a frying pan and added the paste in thick dollops. It made four huge pancakes (I wanted to use up all the mix, I didn’t want any left over).

The pancakes were fried gently until crispy, then flipped over to do the other side. They had to be cooked for quite a while to make sure the flour was cooked through. If I had made less mix, the pancakes would have been thinner and cooked quicker.

While they were cooking, I grilled a rasher of bacon and poached an egg for me, and some chicken goujons for DP (he’d already had an egg and a rasher in a roll for lunch).

The pancakes smelled divine while they were cooking and they tasted pretty good too.

One was plenty, although DP had another one. That leaves one more, which I may well have for breakfast tomorrow. Yum

You could use any curry paste you like for these, or of course, curry spices or curry powder mixes. Any flavour you have will work. I have a jar of Madras and another of Rogan Josh, so I shall be trying those out too, although I must admit, Balti is my favourite for this kind of thing.

It’s almost 11pm, so I’m off to bed now. I’ll work out the cost and calories and add it to this post and the list of recipes page later on. 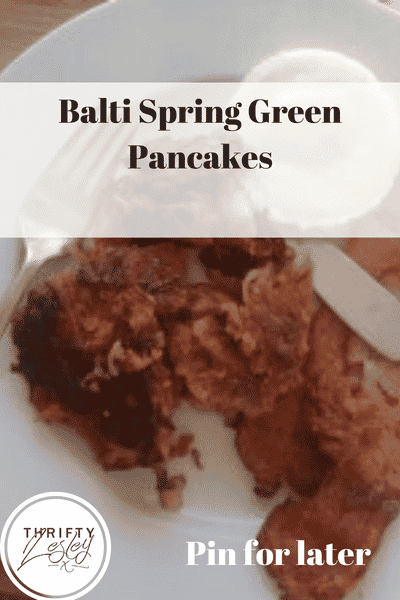 Don't know about Thrifty, I'm more like Filthy Lesley today
20 handy hints using everyday items, do you know these ones?