Can 1 sausage can make 2 sandwiches? Plus a sublime fruit and nut case paste

I did a demo on Friday of Thrifty Lesley food, for 2 hours, to a group of ladies. It was so lovely cooking and chatting, with two other women popping things in and out of the oven, doing things on the stove top under instruction, and washing up and returning things to use again. And they even paid me for it! I was doing it as a contribution to my community and when they asked how much they owed me, I said £20, which was for the ingredients, and that was generous. But they laughed, and said, oh, come on, and ended up giving me £50, which was very nice. I’ll contribute the extra £30 to the local foodbank. Not because I’m a goody goody, or sanctimonious, or even holier than thou, but because I don’t need it, I wasn’t expecting it, and they do need it, as do their clients.

The recipes I used

I did a great many recipes in that two hours. I always get people to taste everything when I do these things, you can’t really tell what something is like if you don’t taste it can you? I started off with demonstrating the oil pastry. I like to get across how easy it is, and later, at the tasting stage, how short and delicious it is. So I used that pastry to make a chicken and sweetcorn pie in a 20cm pie tin. There were 20 people there, and I wanted everyone to be able to try it.

Next up was vegetable crumble and while the pie and the crumble was cooking, I demonstrated the peanut noodles.

The last recipe for a dinner were sausages. I forgot to pick the sage at the last minute in the morning, so they weren’t really spicy enough, shame.

Then we reminisced for a while about Shippams pastes, followed by a demo of the beef, chicken and sardine pastes, and the super easy mackerel pate (that was especially popular). I used beef mince this time for the beef paste, rather than joint trimmings, and it worked really well. They all seemed to like them all and everything was eaten. I took a large baquette and a value loaf to put things on.

I also did the instant Boursin, but used garlic powder instead of paste from a tube, and it just wouldn’t go garlicky enough, so I shan’t use powder again for it.

I finished off the session with raisin pancakes. These are such simple things, and always get a great reaction at a demo. They got 11 out of 10 this time!

Most things were completely consumed, with very few leftovers to take home. Today I raided the fridge and had a good old clear out. Made a lovely soup using all sorts of bits and pieces. There was a little bit of the raw beef mince leftover that needed to be used, so I made a paste with that. A loan Chinese flavoured pork chop from the butcher was also converted into paste – delicious by the way.

And there was a handful of sausage mix that hadn’t been cooked at the demo. So I added a big handful of the missing sage leaves, lots of black pepper and cooked it off. Then in went a dollop of fat from a joint, and some butter, and the whole lot was whizzed with a stick blender. I always use a stick blender in a half litre jug to make these pastes. There isn’t enough for the food processor to process. The resultant sausage paste is gorgeous! One sausage could be stretched in this way to make 2 sandwiches which would make it very cheap. When I make a sausage sandwich in the usual manner, I use 2 sausages per sandwich, so this would be a quarter as much sausage, but just as much flavour. You could add some rinsed baked beans if you like, to make it go to 3 sandwiches. I tend to use butter in these sandwiches, but you can use any spread to make them. 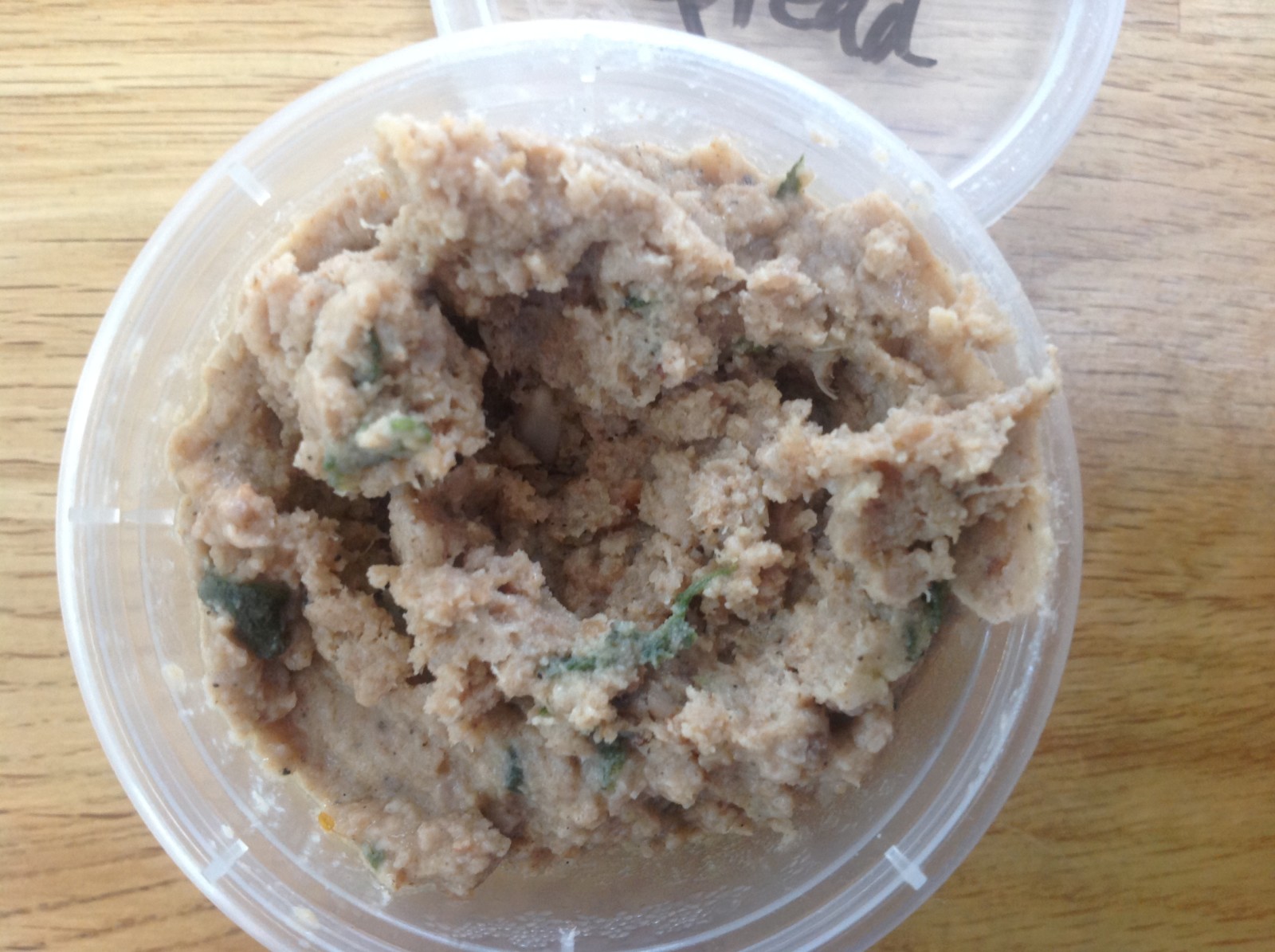 I melted the butter in a small pan, scraped it into the jug, added the raisins and nuts and blitzed it with a stick blender. It is truly scrumptious!! I tried a little on a spoon, then another little bit with a scoop of value cream cheese, all very scrummy. This would make a great sandwich filler, with or without the cream cheese. If you want it for school lunches, where nuts are not usually allowed, just leave them out. It would be sublime spread on a scone, with/out butter and/or cream, or on a hot toasted crumpet. 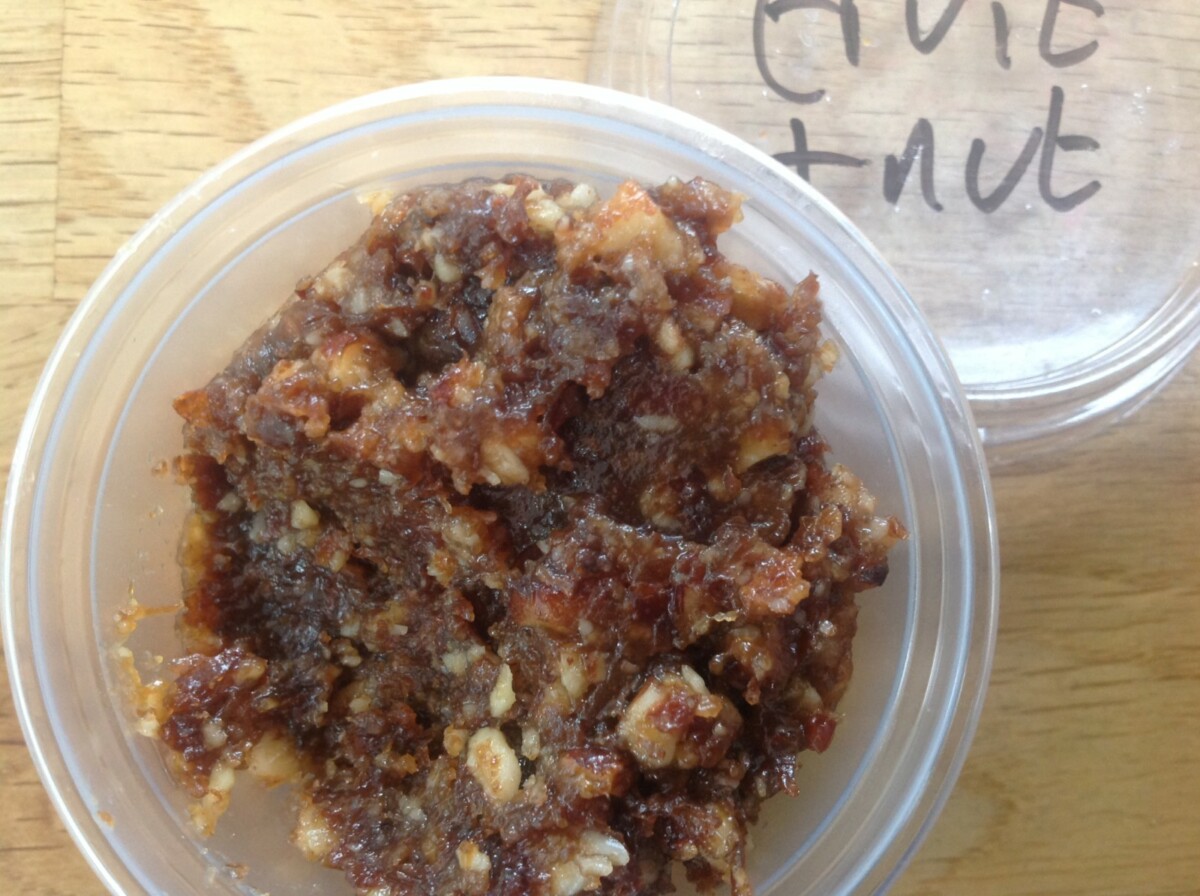 These sandwich pastes are proving very versatile and I haven’t made one I don’t like yet! 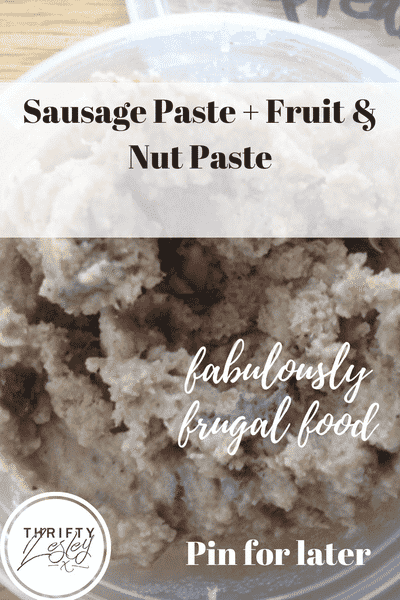