Sweetcorn Fritters, 30p a serving
Home made greetings cards, save a bundle if you want to give Christmas cards

Been having another little play in the kitchen today. Made two chocolate fudge cakes, one made with oil not butter, and eggs, my usual version. The other made with oil and no eggs, which coincidentally is vegan if this is of interest to you. I make a very good choc fudge if I’m allowed to blow my own trumpet. I wanted to try one with no eggs as I am experimenting making cakes with no eggs because often I can’t include eggs in a weekly plan as there aren’t enough funds, and even if I do include eggs, I can’t afford to use 4 of them to make a cake. 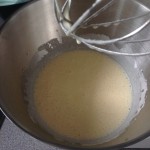 This is oil, sugar and 4 eggs whisked up. The usual fluffy mixture, with lots of volume. 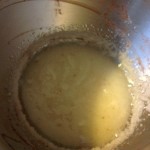 This is the oil and sugar and no eggs mixture at the same stage. Wasn’t at all sure what this would be like. It had a little volume, but nowhere near as much as the eggy version. I didn’t know if it would homogenise together, but it did. 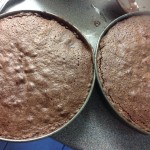 The oil and eggs cake after baking. This is a soft, tender cake. 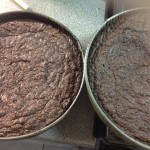 The no eggs baked cakes. You can probably see that the texture is very different from the eggy version. It didn’t feel soft and it wasn’t holding together, it was positively crumbly. I wasn’t at all sure if it was going to work at all at this stage. 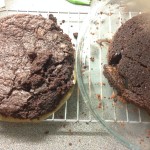 The no eggs cakes turned out of the tins. You can see the texture better here. 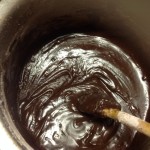 The fudge icing in the saucepan 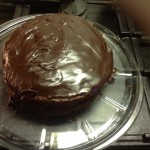 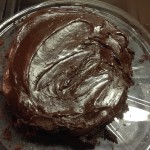 And the no eggs version 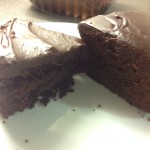 A direct comparison of the two versions. The eggy version is on the right, the non-egg version on the left. I am very pleased with the height of the eggless version and the tenderness of the crumb in the completed cake.
In summary, although more difficult to handle, the eggless version is well worth making and a very tasty cake. The advantage of the fudge icing is that it covers up all the flaws.  So all in all, a resounding success. Although now I’ve costed it, there is no way I can include a £2.28 tin of cocoa in a £14 weekly shop :0, oh well. Maybe one of the many other versions would be doable.

There is surprisingly little difference in cost between the egg and non-egg version, this surprised me. It is down to the cost of the cocoa powder. I had to increase the amount quite a bit in the non-egg version. It just goes to show – I am constantly surprised when pricing things, some are more expensive than I thought they would be, others much less. We just need to work it out so we know.

And so, the recipes

Whisk the oil and sugar together. Add the egg yolks, beating a little between each one. Use a stand mixer if you have one, or a big bowl and a big wooden spoon.

Whisk the egg white slightly with a fork, not too much, and adding about half an eggs worth at a time, beat them into the mix. Beat a little between each addition.  Keep mixing until you have a light and fluffy mixture. Don’t keep going too long as if you mix it too long, something happens to the mixture and it begins to lose volume and go runnier.

Sieve the flour and cocoa together and fold them gently into the eggy mixture.

Pour half the mix into each tin and level off the top. Put them into the oven immediately (baking powder starts to work as soon as it gets wet) and bake for 20 minutes in a fan oven, 25 minutes in a non-fan.

Remove from the oven, the top should be springy. Leave in the tin to cool for a few minutes to firm up a bit, then turn onto a cooling rack

While that is happening, make the fudge icing £1.03

Melt 50g butter (£1.20/250g, 24p) or spread with 3 tbslp water in a saucepan. Sieve 250g icing sugar (Asda, 1kg/£1.88, 47p) and 2tbslps (35g) cocoa powder (Asda £2.28/250g, 32p)- this must be cocoa, not drinking chocolate which has lots of sugar and milk powder in it and won’t give enough chocolate flavour to your cake. And both the icing sugar and the cocoa need sieving as lumps are completely impossible to get out once they are mixed with the melted butter – believe me, I’ve tried. Give the fudge icing a bit of a beating to make it glossy. Leave to cool

When the cake is barely warm, and the fudge icing is warm, but not so warm that it is still very runny, spread about half the mix onto one cake. Put the second cake on top and spread with the rest of the icing. If the icing has cooled down so much it has started to harden up, warm it over a gentle flame until it softens.

Wait impatiently until the cake and icing have firmed up, then have a big wodge, maybe with some ice cream, or maybe still warm or warmed in the microwave for a few seconds. Warning, this has squillions of calories and can’t be fitted into any slimming diet unless you have the slenderest of slices and what fun is that!!!!

Eggless version, £1.35 for the whole cake excluding icing, £2.38
as an egg weighs about 80g, I needed to replace that volume, 4*80g=320g, so I have increased the remaining ingredients accordingly

Whisk the oil and sugar together.

Use a stand mixer if you have one, or a big bowl and a big wooden spoon. Stir in the water – this was needed as the eggs provided a lot of moisture which was now missing

Sieve the flour and cocoa together and fold them gently into the oil and sugar mixture.

Pour half the mix into each tin and level off the top. Put them into the oven immediately (baking powder starts to work as soon as it gets wet). I needed to increase the bake for this version from 20 minutes to 27 minutes in my fan oven, so 32 minutes or so in a non-fan.

Remove from the oven, and the top should look done, but won’t be as springy as a sponge with egg in it. Leave in the tin to cool for a few minutes to firm up a bit, then turn onto a cooling rack. This was quite tricky as the cake didn’t want to leave the tin, even tho the bottom was lined. Do the best you can. I left the lining on the bottom of the second cake as I knew I wouldn’t be able to transfer it to the top of the half iced cake without

While that is happening, make the fudge icing as above

You now need to get the bottom half of the cake onto a flat plate.Again, this was quite tricky and I had to patch it back up when bits fell off. When the cake is barely warm, and the fudge icing is warm, but not so warm that it is still very runny, spread about half the mix onto one cake. Now use the second half with the lining still attached to help you put the second cake on top, remove the lining and spread with the rest of the icing. Bits still fell off the second cake, but at least I could move it. I just splatted them into the icing to glue them in place. If the icing has cooled down so much it has started to harden up, warm it over a gentle flame until it softens.

Cut either cake into 8 pieces

I don’t think I would make a plain vanilla sponge cake with oil instead of butter, so if you want that version, I would use butter/spread, replace the cocoa with extra flour and add a tsp vanilla extract

The chocolate fudge icing is fabulous as a sauce, just thin it down with a little water, go steady, a tsp at a time, it thins very quickly. Keep it in a jam jar and use it on everything from pancakes to ice cream.

Coffee and Walnut, this is DP’s absolute favourite – add 3tsp instant coffee granules dissolved in half tsp hot water whilst creaming the eggs and sugar. Leave out the cocoa in the icing, make it the same way with some coffee added, taste it for strength. Put 50g walnuts on the top of the cake, chopped or whole, up to you, and 25g between the two cakes

Lemon Fudge – add the zest and juice of a lemon to the mix whilst creaming. Sandwich with lemon fudge icing or lemon curd and cream

Orange Fudge – as above using an orange. Orange curd if you can get it is delicious, can be made fairly easily
Black Forest – use a chocolate sponge and fill with whipped cream and cherries
Fruit and Cream – sandwich any variation flavour sponge with whipped cream and a good jam/curd and/or any fruit you like – strawberries, raspberries, apricots, peaches, fresh or tinned, banana, mango, one of those cheap tins of broken mandarins
eg – chocolate sponge, maybe with some orange zest in, sandwiched with cream and mandarins
lemon sponge sandwiched with raspberries and cream
vanilla sponge sandwiched with strawberries and cream – quintessentially English

or, using any of the variations, using half of the cake mix, as a baked sponge. I would use one of my oval pyrex dishes that I use so much, you could put jam, curd, treacle, apples, plums, rhubarb etc etc in the bottom. Bake in a medium oven for about half an hour, or microwave it for 6 minutes. Serve with custard, cream or ice cream 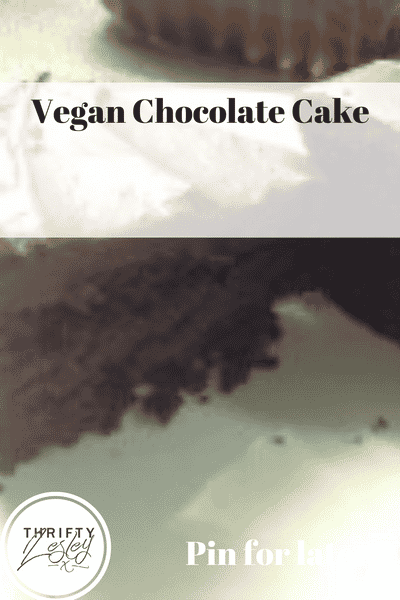 Sweetcorn Fritters, 30p a serving
Home made greetings cards, save a bundle if you want to give Christmas cards