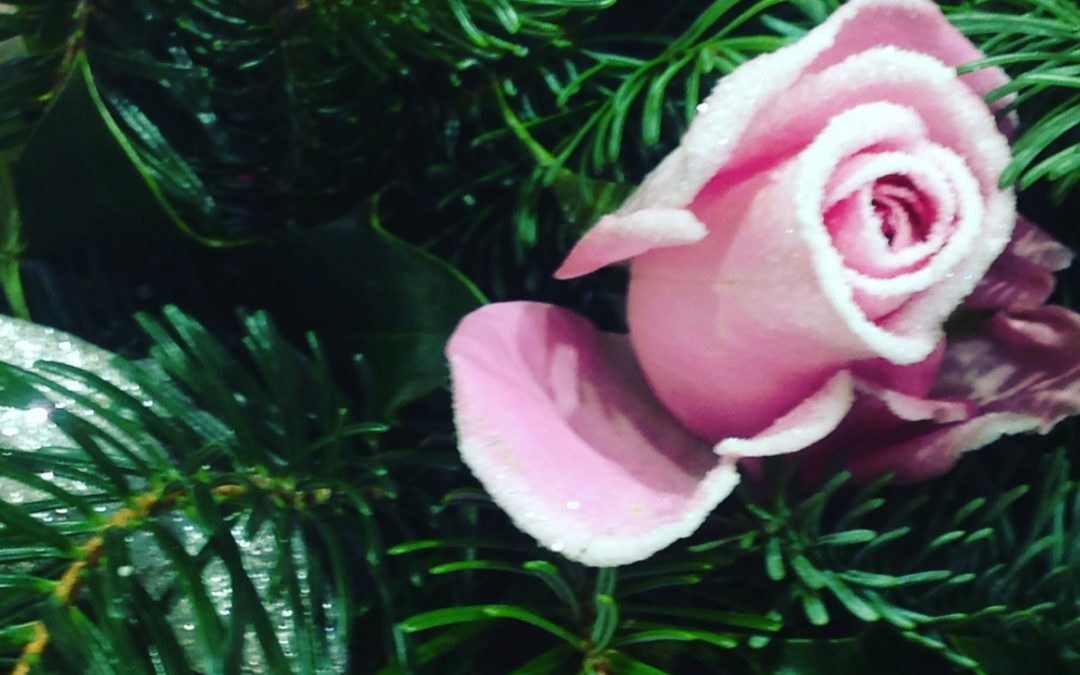 A couple of fun (and free!) things to do over the Christmas holidays
Some Festive tweets and a few questions to think about

On Wednesday, we had our annual WI Christmas party. It was lovely! We all brought a plate of food to share. I was asked to hold a list of what people were bringing, as several years ago, we had far too many offerings with smoked salmon. Lovely as it is, there is such a thing as too much. Most of the time though, it all works itself out, and we have a lovely mixture of delicious things. Highlights for me this year included the obviously homemade pesto dip, it was extra good, and the super scrummy mince pies, with a generous layer of frangipan on top.

We had a lady from a local garden centre and she showed us how to make a table arrangement using greenery, candles and baubles. We all had to bring greenery and baubles and some strong scissors or secateurs. Melanie from the garden centre supplied a little bag containing oasis (flower arranging foam) baubles, a container and other bits and pieces. She only charged £2 for the bags, and had other bits we could buy also very cheap. All monies received during the event were donated to a cancer charity too. I made this arrangement, and I am very pleased with it. 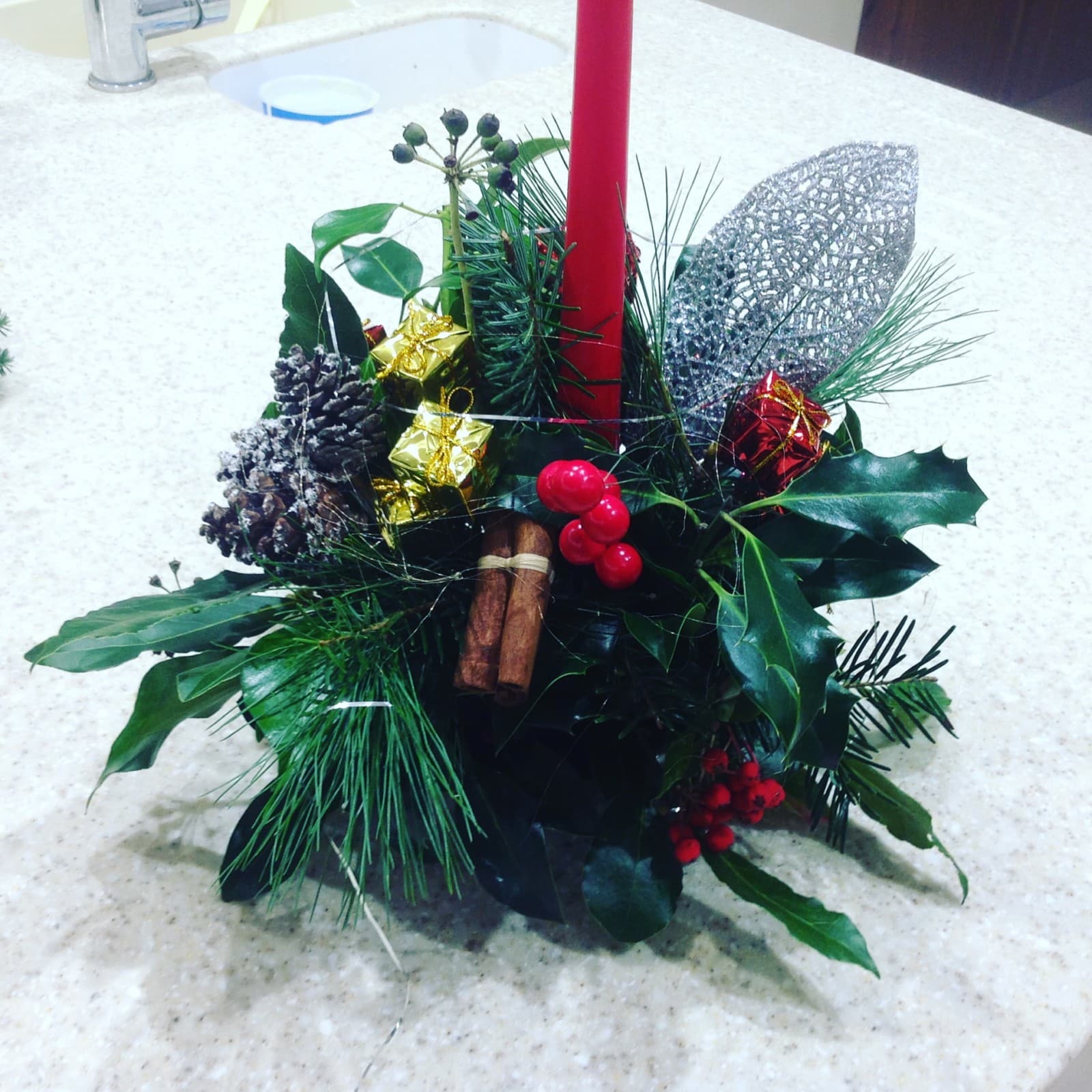 Melanie made three further arrangements during the event and we all had a raffle ticket. When they were drawn, I had first choice! I chose this beautiful arrangement. The pink roses are real, although they look like they might not be. They’ve had some kind of glue put on them and a bit of frosty stuff. 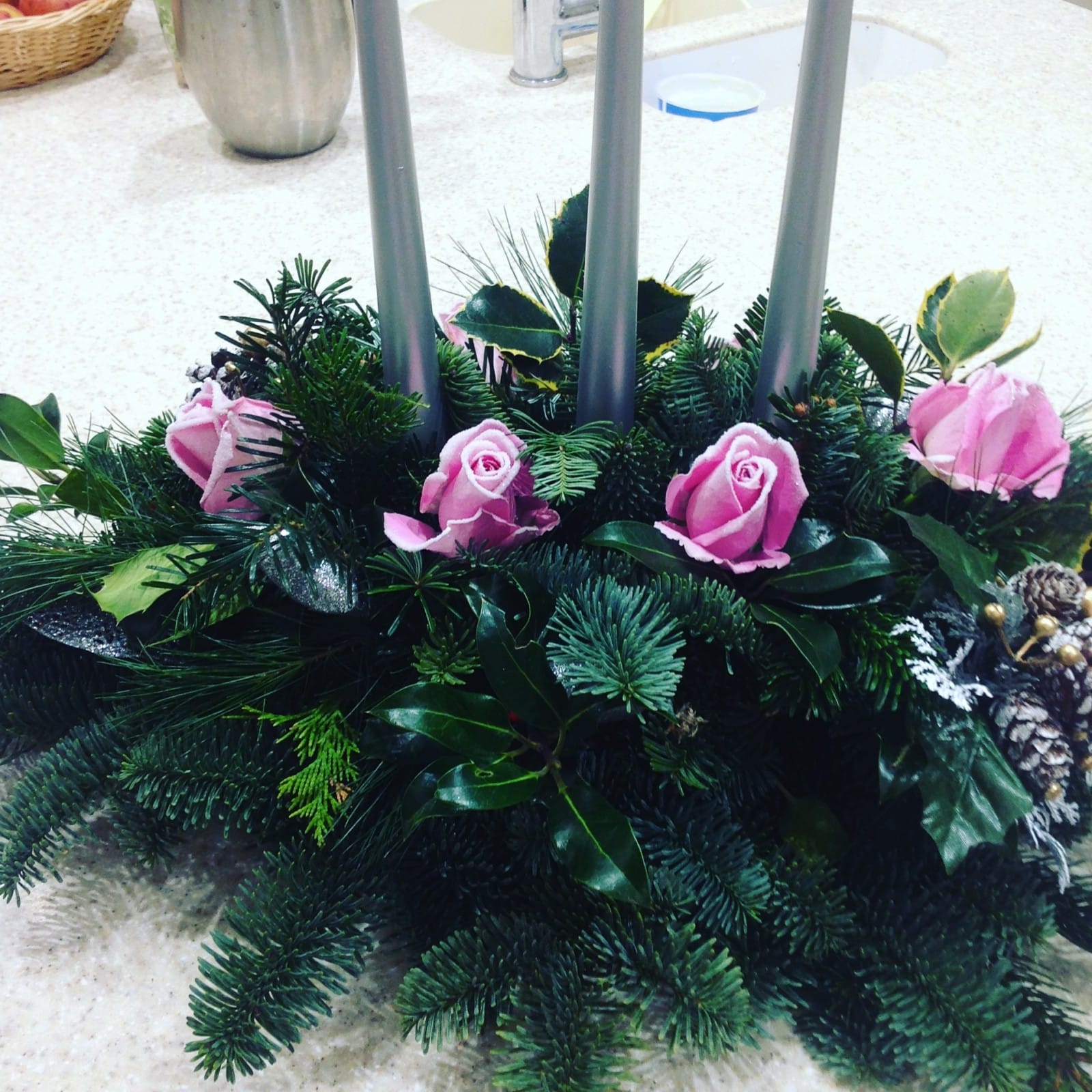 Getting (even more) forgetful

Earlier in the week, we were looking for the big grill pan and couldn’t find it anywhere. I was convinced it must have fallen down behind the built in fridge, but Mike said it wouldn’t have fit. Then I had a vague remembrance of possibly carrying something to the last meal we had at WI. Maybe I hadn’t brought it home again? So, when I got to the hall, I had a look, and yes, there it still was! Luckily, it hadn’t walked off to someone else’s kitchen, as any other equipment left in the hall has a tendency to do. And not only was the grill pan sitting there, so were two other big baking trays that came with our new oven. I hadn’t even realised we hadn’t got those! They make such useful carrying trays when catering, I use them for that all the time. This year, I surpassed myself. Three things I left behind! THREE THINGS! I carried home my arrangements triumphantly. Once I got home, I had a call – I have your bag of food items here, come and get it when you’re ready. Oops, ok. Then another call, I have a bag of greenery and baubles. Ok, thanks, I’ll come and get it. Then a third call, someone holding a pair of kitchen scissors for me. Flipping heck, I need a label round my neck!

Went to the last regular Friday coffee morning for 2016 today, we next meet in the second week of January. It will be the shortest day on the 21st, and then the nights will start drawing out again. Next year will be an exciting one as we have two quite big projects. We are re designing bits of the garden and I a man really looking forward to having some prettiness in there. What I have tried just hasn’t worked. The other big project is the loft extension. We have some plans now and keep looking at them and trying to make sure we make the best possible configuration of the space we have available. We’re hoping to start in the spring. Can’t wait! . . .

A couple of fun (and free!) things to do over the Christmas holidays
Some Festive tweets and a few questions to think about