Home made Paneer. Cheap, delicious, versatile and nutritious. What’s not to like? 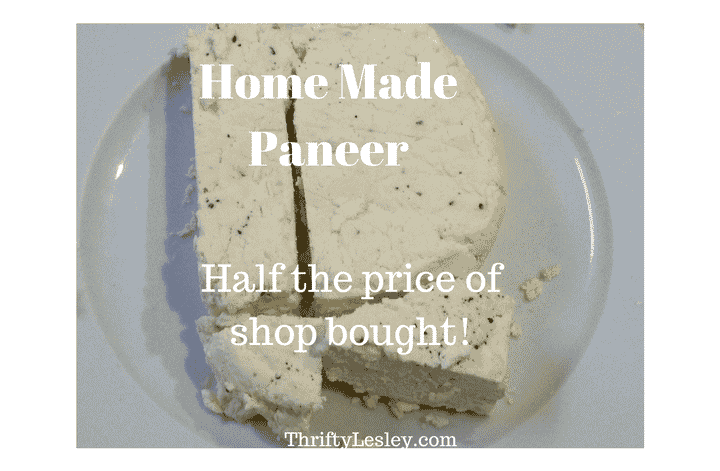 Paneer curry, using lovely home made paneer. 34p each and Yummy!
A delicious Sag Aloo that really hits the spot.

Inspired by the talented Miki Knight on the wonderful Feed Yourself for £1 A Day face book page, I decided to finally get round to making some home made paneer. Following Miki’s method, this is what I did

Asda is selling 250g of paneer for £1.50, so this works out almost half the price and definitely worth doing.

Heat the milk until just off the boil. This was the hardest part for me. I found the easiest way was to use the microwave. The first time I tried, I used a thick bottomed non-stick pan and by the time it boiled, I had a thick crust of burn at the bottom of the pan and it made the cheese taste burnt. The second time, I used the same pan, and turned the heat so low it took two hours to heat and I still had a bit of crust at the bottom, although not burnt this time, and the resultant cheese was fine, even though it had pale brown bits in it.  So the third time, I used the microwave, and it was much better I put the whole bottle of milk in a large see through bowl, so I could see when it started to bubble. Didn’t want it to boil over! It took about 20 minutes from fridge cold. I did make a note of how many minutes it took, but I Iost count!

Once you have your milk heated, however you do it, stir in the lemon juice and leave for at least 10 minutes for the curds and whey to separate. I covered my bowl with a dinner plate. 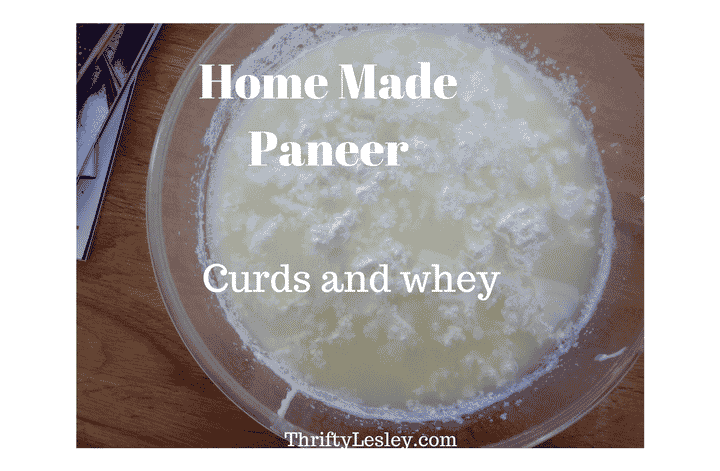 While you are waiting for the curds and whey to separate, prepare something to strain it. I only have the one bowl large enough, so I tipped the mixture into a saucepan. Then put the colander in the bowl. The first two times, I lined the colander with a tea towel, this time, I used a jelly bag. Once the mixture had had it’s ten minutes, I tipped it into the jelly bag in the colander to strain.

Leave the mix to drain for half an hour. Do not throw away the whey! Then squeeze it through the jelly bag / tea towel to get rid of more whey. This part was definitely easier with the tea towel. I found that I couldn’t get much of a squeeze on with the jelly bag. It was threatening to burst. Now open up the tea towel / jelly bag and add some seasoning. 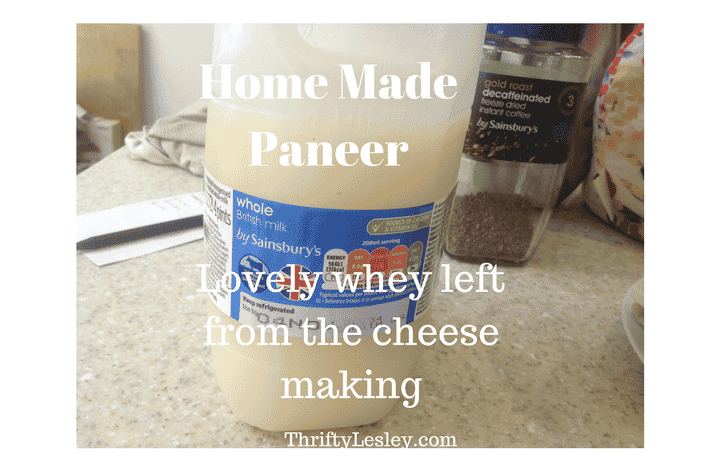 Pat the cheese into an oblong, rewrap in the tea towel / jelly bag and place on a plate. Put another plate on top and weight the whole thing down with a saucepan full of water or some tins. I also put a folded piece of kitchen paper, touching the tea towel, to act like a wick and drain away the excess whey. 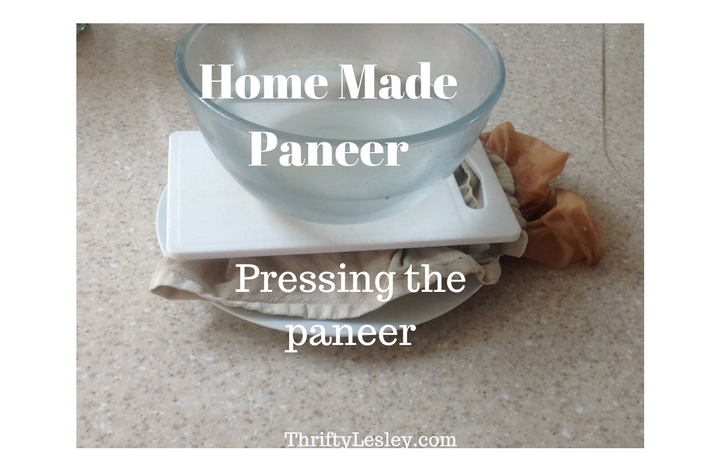 Leave for half an hour or so, and you’re all done, your paneer is ready to use.

For now, put all that lovely whey in a bottle and pop it in the fridge. There is so much to say about that, that it’s going to get its own post.

Having made this a few times now, I would add some flavourings to it sometimes at the seasoning stage. Some fine chopped rosemary or sage; horseradish; pink peppercorns; chilli, fine sliced; miso.

For me, it would be worth experimenting with some sweet flavours too. I would try adding cocoa powder, frying in butter and eating for breakfast with some chopped fruit. Or stirring through some coconut milk powder for a different flavour. That one could be used in a sweet or savoury dish. Or flavour with muscovado and have with a fruit platter

The paneer has a lovely fresh and creamy flavour. I fried some and it went beautifully crisp and brown, tasting wonderful in a curry.

Paneer freezes very well, so you can make some when you have a bit of time to potter in the kitchen and stash it away.

So now you have 400g or so of lovely fresh paneer sat in the fridge or freezer, what are you going to do with it. Well, the next post will be one of my favourite ways, a curry. In the meantime, Google has supplied a great many ideas.

Here are a couple of ideas from BBC Food, including Anjum Anand recipe to make it

Some more ideas here, and here

I do hope you are inspired to have a go at this. It was fun to do, and I saved money at the same time as making a delicious and versatile ingredient.

Paneer curry, using lovely home made paneer. 34p each and Yummy!
A delicious Sag Aloo that really hits the spot.