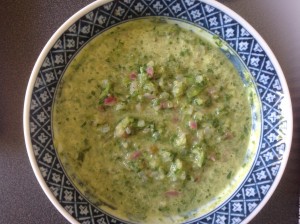 I was cruising around the internet last night looking for ways to use radishes, as the box I grew in the greenhouse is now stuffed full of the most perfect specimens. Not a slug bite out of any of them, lovely size, nice and peppery. Gorgeous, the best ones I have grown in fact.

I found an amazing number of ways of using radish, who knew! There is even an entire website devoted just to them! LoveRadish.co.uk

One of my favourite chefs, Hugh Fearnley-Whittingstall did a Guardian column in May 2012, and in it, there is a recipe for a chilled radish soup, which uses all the green top as well. I can usually ‘read’ recipes and have a pretty good idea of what the outcome will taste like, but with this one, I had very little idea. So I had to try it didn’t I 😉

This is the recipe, as written by H F-W, from the column
Chilled radish and mint soup (V)
This is a really unusual and wonderfully refreshing summer soup that makes use of the radish leaves as well as the roots. Don’t worry if you have only leafless radishes: rocket or watercress can stand in. Serves four as a starter.

Photograph: Colin Campbell for the Guardian 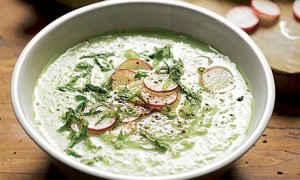 Set aside two of the radishes. Bring a large pan of salted water to a boil, plunge in the radishes, their leaves (or the rocket or watercress) and the mint, cook for just a minute, then drain. Refresh immediately by plunging them into a bowl of cold water, or running them under the cold tap in a colander.

Put the blanched radishes, leaves and mint in a food processor with the stock, apple, creme fraiche, cayenne and some salt and pepper. Blend until smooth. Taste, add more salt and pepper as needed, and chill.

Chilled radish and mint soup: Use rocket or watercress instead of radish leaves if need be. Serve the soup cold, garnished with slices of the reserved raw radishes and a little shredded mint.

I used value soft cheese instead of creme fraiche, and some mint from the garden.

I first tried whizzing it using my hand held stick whizzer, but that was nowhere near up to the job, the stalks immediately wrapped themselves round the blades, and that was that. Then I tried the food processor, but that didn’t really do much with it either. So finally, I fixed the liquidiser to the food mixer and did it in there. It’s the first time I’ve used it as I always, always, use the hand held one. Finally I got some success and it chopped everything up, nowhere near as smooth as the picture in the article tho.

The taste is a refreshing, creamy, peppery, crunchiness. I’m not sure I would want a huge bowl of it, but as a starter, or some kind of light meal, it is perfect. I tried it with a little walnut bread and butter, and that was a lovely combination. I would never have come up with something like this. This is a great way to maximise your radish crop, using every last bit of the vegetable, except the tiny bit of root.

I’m going to try the glazed ones as well. What do you think, sound good? 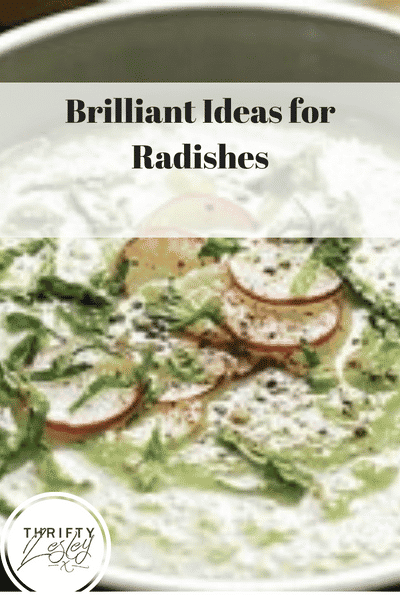