Piccallili – around 84p a jar 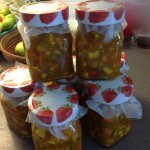 Piccalilli - not 98p as I said, but 84p, because I can't count!
Gnocchi made with dried mash! Served with tomato sauce 15p a serving

I made some Piccallili this week. I made some last year and found that the men in particular amongst my aquaintance liked it, and it was received with pleasure as a hostess gift too. So as it is coming up to that time of year when we like to exchange gifts, I thought it might come in handy. It takes 6 weeks to mature, so plenty of time to make some for Christmas. If you like to make hampers, it would make a lovely addition, or you can shooze up a jar with cellophane wrapping and some curled ribbon. Almost anything looks attractive wrapped up that way. I have made biscuits as presents for friends and they look much more special with a bit of ribbon waving about

Having now costed up the recipe, I was disappointed that it worked out about the same price as a jar bought from the supermarket. Having said that, it tastes a great deal nicer. The cost is in the vegetables and the vinegar, wonder if bulk bought white vinegar would work?

It is another Hugh Fearnley Whittingstall recipe and makes 7 jam jar sized jars. 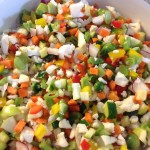 I used some ancient radishes mouldering in the veg drawer, the very last of the runner beans, some cauliflower, a large courgette,  a yellow pepper and some carrots. Obviously, the more ingredients you can put in from the garden, the cheaper it will be.

I cut all the vegetables up into small pieces and mixed them with the salt, covered them with cling film and left them overnight.  Then I drained them, rinsed them and drained them again. 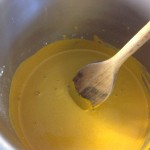 While that was happening, I thoroughly washed and dried some jam jars and cut up some cereal packet inners to protect the lids. The vinegar would make the inside of the lid go all rusty if the mixture touches it directly.

When the sauce was ready, I mixed it into the prepared vegetables and gave it all a good old stir. Then spooned it into the jars, topped each one with a piece of the waxed paper and popped a screw cap lid on straightaway.

I used some old cider vinegar, the last from a bottle of sherry vinegar and had to buy another bottle of cider vinegar to top it up with. I used honey because I had some, but I’m not sure how much it contributes to the taste. I used a grainy mustard because I don’t like English mustard and didn’t want to buy some just for this. I also used the spices ground because that it was I had.

The original recipe works out at 84p a jar, but you could cut that down by using home grown vegetables, smartprice, bargain bin or market ones, and replace the honey with sugar.

If you don’t have the particular spices that Hugh uses, I would be inclined to try it with a  mild curry powder and mustard 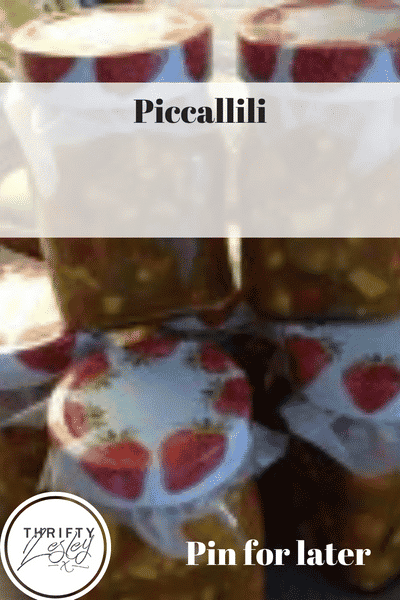 Piccalilli - not 98p as I said, but 84p, because I can't count!
Gnocchi made with dried mash! Served with tomato sauce 15p a serving