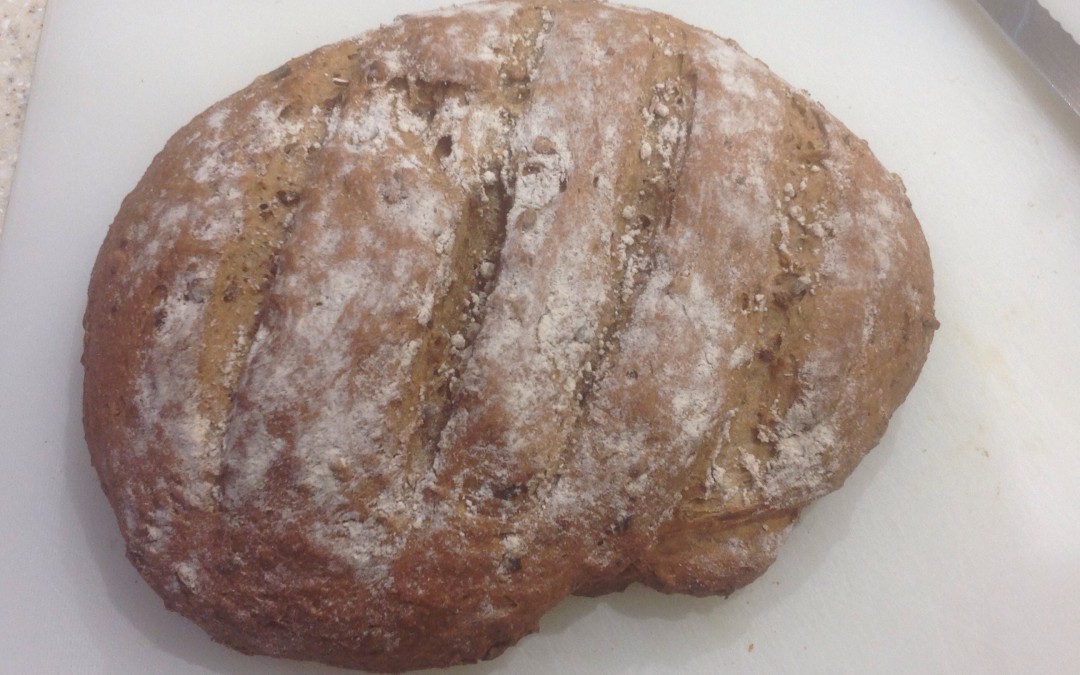 Productive day today. Had a rummage in the loft for Reverse Advent, made a loaf, some soup and an apple cake.

So going today are; a surplus masala tin; several more cardboard boxes that held appliances that won’t need the box any more; an old sewing project that will never get finished, by me; Mike has three boxes of electrical stuff to sort through; some baby stuff; a plastic storage box with lid; another faux plant; some large plastic bags used for delivery of items, we thought we might use them for something, but never did. I’ve even made the ancient mattress accessible now, so that will go one day this week.

Flushed with that success, I came down, cleaned up and made some lunch. I had left a bag of carrots in the plastic wrapper in the cupboard, where they sweated and discoloured. So the obvious thing was some carrot soup.

To go with it, I thought I’d use some of the embarrassing excess of granary flour, and made a free form loaf, adding a couple of spoons of the gluten flour I got recently, to give the loaf a bit of added lift. It worked really well, and the loaf came out brilliantly, so I shall def be doing that again. 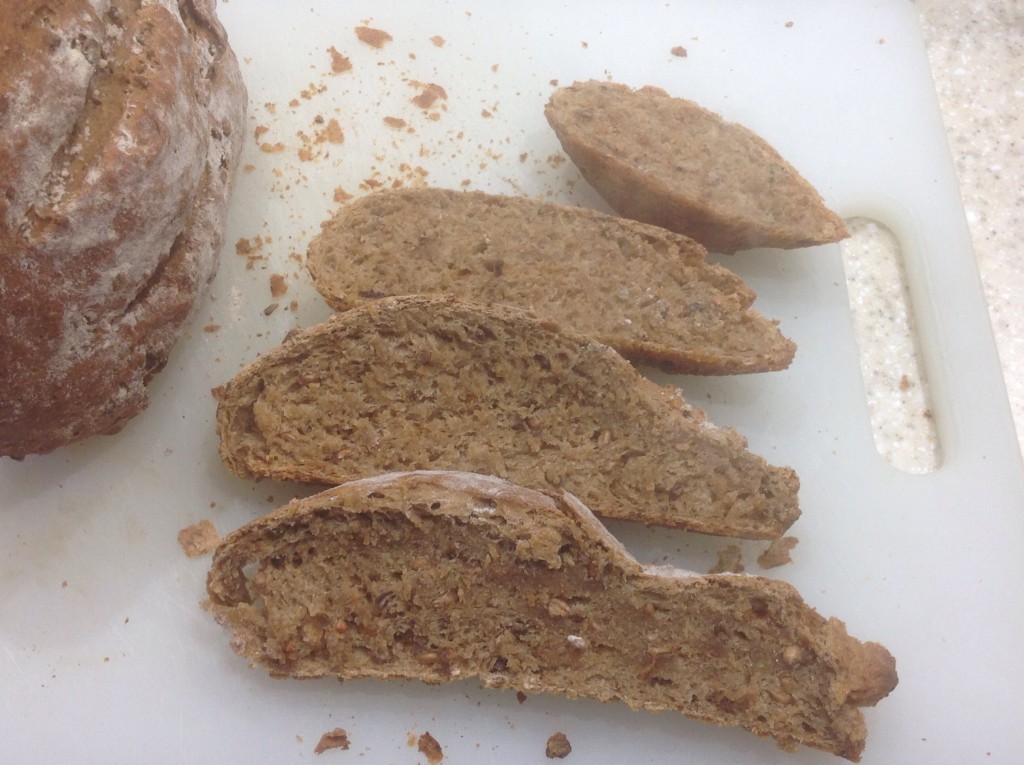 Then, to use some apples and more flour, this Spicy Apple Cake.

The original recipe came from an ancient recipe collection called Good For You. I have twiddled with it a bit. It used wholemeal flour, so it should easily cope with granary, and it did. I used butter, but not at all sure you can taste it, so the usual rapeseed oil would be fine.

I used to make it in a 20cm round cake tin, but this time, I made it in a brownie silicone ‘tin’ as I wanted to cut it into smallish squares. It’s a delicious cake, light, flavoursome and full of apples. 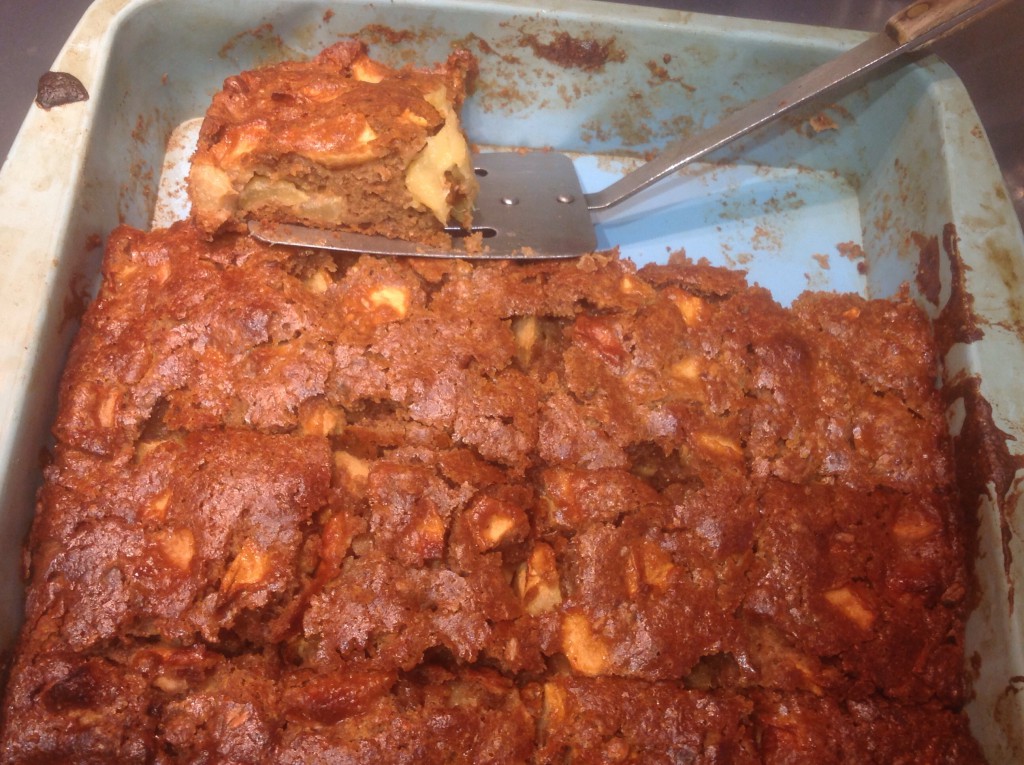 All priced from Asda

Put the flour, baking powder, mixed spice, butter and sugars in a bowl and mix together. Give the eggs a little whisk and stir through.

Fold through the apple. Now the recipe doesn’t add anything else, but as I used the granary flour, there wasn’t enough moisture to make a cake mixture, so I added a generous splash of milk.

I used apples from the garden, and the cheap granary flour. The cake will work with wholemeal or just ordinary value white flour, I’ve made it with both at various times. To make it seasonal, you could add a handful of cranberries, or maybe some chopped walnuts. It used up lots of my apples, which do need using now. A bit of candied peel would make a nice taste bomb, or add some value plain chocolate with the apples for a different twist 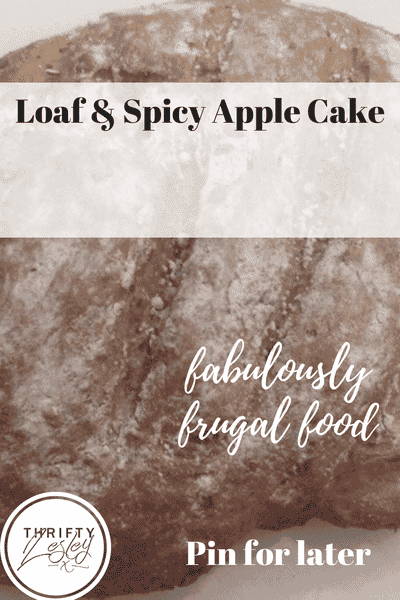