The gym, average curries, out of season garlic and lots of potatoes

Actually went to the gym today. I procrastinated all day as I was sort of dreading it, expecting it to be horribly hard. But in the event, it was fine. I did my entire workout, just dropping down a weight for one exercise, and leaving off 1 plank from the 2 x 1 minute. So I’m feeling a bit smug now 😏

Need to get back in the rhythm of going 4 times a week. I find it extraordinarily easy to not do any exercise. At all. I wear a pedometer every day, and if I don’t bother with any exercise, it clocks up 2000 steps. Which isn’t a lot!

Did a little gardening today as well. I ordered various things from Thompson and Morgan, the seed people, and some arrived today. Two big fat bulbs of garlic and 20 Pink Fir Apple potatoes. It says on the invoice that it is autumn garlic and should be planted October to December, or September to February, and harvested in late June/July. Oh dear, it’s now April, that’ll confuse it! I broke it into individual cloves and planted it anyway, and am crossing my fingers that the longer, hotter days, don’t make it go to seed. It won’t be a lot lost if it doesn’t work, just irritating.

The potatoes are a favourite variety. They are long and knobbly, a waxy variety, impossible to peel, and with a lovely flavour. I read recently that you get a really good crop from a potato by growing it in an 8 litre pot. Just 8 litres, not very big. The instructions say to fill the pot to within an inch of the top and push just one tuber in, to about a 4″ depth. 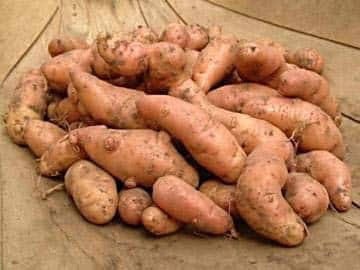 So this is very much an experiment, we shall see how they perform. I’ll keep you posted. I’ve got 20 tubers, that’s a lot of 8″ pots!

Did a curry when I got back from the gym. I used a sachet of Tandoori mix from Approved Foods, 20p, some potatoes, onions, greens and a chicken breast, and added some coconut milk powder. It didn’t taste all that, so I added a good spoonful of Madras paste. That improved it, and we ate it, but it was extremely average and not something I would want again.  Not one of my more successful experiments.

Tomorrow I’m going to get a pack of liver out of the freezer and make some faggots. I love liver, DP hates it, so I don’t cook it often. The faggots recipe is one I have in a very old folder, carefully copied out from somewhere. I’ve had it at least 40 years!

I’ll give you the recipe tomorrow, take some pictures, and cost it up.